Near feeling of distant space 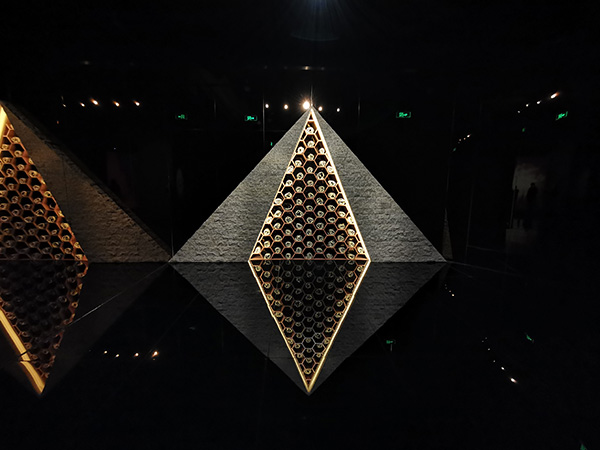 An immersive exhibition inspired by the Three-Body trilogy, China's best-selling science-fiction novels, and seen as "rendering for audiences the true feeling of being surrounded in the re-created scenarios in the books" by Hugo Award-winning author Liu Cixin, made its global debut in Shanghai on Jan 10.

Shi Fei, board chairman of Shanghai Zun'an Tongheng Cultural and Creative Development, the exhibition's organizer, says the show is dedicated to re-creating some scenes from the books with the help of technology following a year's preparation with 27 curators and artists from different countries.

"We strove to present the fabulous experience that the magic and magnificence of the trilogy renders for its readers in a spiritual world, with multidimensional senses－combining visual, audio and video interactions," Shi adds.

The exhibition replicated six iconic scenes in the trilogy, the first book of which, The Three-Body Problem, won the Hugo Award in 2015. The trilogy presents an extraordinary story, describing a vast universe where civilizations rise and fall and also present infinite possibilities.

"It was very exciting to experience the exhibition, and it was like browsing through the trilogy spanning 18.9 million years within minutes," says Shi.

Unlike exhibitions related to paintings or sculptures, the Shanghai show is an attempt to turn pure imagination into something physical and arouse people's emotional resonance through a creative atmosphere, says Xu Chuan, one of the curators.

Liu, the books' author, is impressed by the scenarios presented at the show, including water drips, planets, severe winter and distant space, saying they are close to what he had in his mind while writing the novels.

"I am also impressed by the curators' creative, interactive and diverse ways of presenting the words from the books. I feel the words have come alive, empowered by technology and art," he adds.

There are various ways words from the books are presented in the exhibition. For example, when visitors stand in front of a large screen that looks like the books' pages, they can turn the "pages" by swinging their arms. And in front of another screen, a signature sentence from a book flows to the ground, character by character, in its original Chinese, like a running stream.

The trilogy has been published in at least 25 languages and has sold over 20 million copies worldwide. Celebrity fans include former US president Barack Obama and Facebook founder Mark Zuckerberg.

Yang Yuanfei, a woman born in the 1990s, who visited the exhibition, says the trilogy "provided a utopia beyond real life on Earth".

"Someone said that any book could be turned into a movie, except the Three-Body trilogy, the first masterpiece in Chinese science fictions to attain international acclaim. It also seemed hard to reveal the vast outlook in the books through an exhibition, so I really looked forward to it," she adds.

The exhibition covers an area of nearly 2,000 square meters, spanning three floors of Shanghai Tower, the world's second-tallest and China's tallest building, situated in the Lujiazui Finance Area of the metropolis.

"The 132-story Shanghai Tower also shows magic of engineering. Its size is equivalent to the waterfront buildings along the Bund (in Shanghai), and it's a vertical city that has the capacity to accommodate 35,000 people," says Gu Jianping, general manager of Shanghai Tower Construction and Development.

The exhibition will run through February 2021. Other Chinese cities, such as Beijing, Shenzhen, Taiyuan, Xi'an, Wuhan, Shenyang and Ningbo, as well as Tokyo and Osaka in Japan, have approached the organizers to invite the exhibition to tour their cities, Shi says.

"The popularity of the novels shows people's common interest in exploring the infinities of space and time through our lives. I encourage people to look at our lives, the past and the future from a higher perspective," Liu says. "As a science-fiction novelist, I keep reminding myself to not get trapped by pressures of trivial, daily life and to maintain curiosity about things from afar."